Games have been a part of Hmong culture ever since they’ve lived in China. They have been passed down from generation to generation. 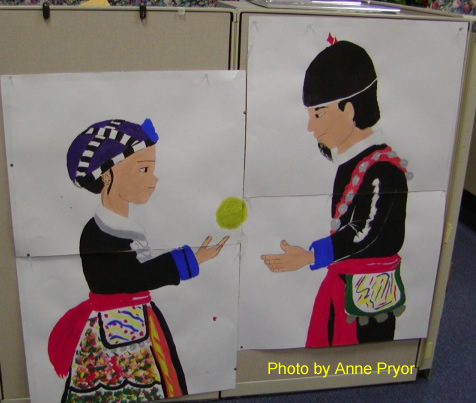 There are many similarities between Hmong and American games. For example tub lub (too-loo) is very much like tops. Jacks is also similar to stick and stone game. Soccer is American is exactly the same as in Asia.

Tub lub is a game where you have two teams. One is on offense and one on defense. The defensive team takes their top and winds it up into a strong attached to a stick. They then swing the stick back then forward and let the string spin off. When the top is still on the string, you flick your hand back to get it to spin when it lands on the hard surface.

The offensive team does the same steps and tries to knock the defensive team’s top off the hard surface. If they do, they move on to the next level. The levels are then based on how far you can fling the top in the same fashion.

In the sticks and stones game, you throw a rock in the air and pick up as many sticks as you can. When the stone comes down, you have to catch it in the same hand that the sticks are in. Once you get all the sticks, the game is over and the person who picked up the last stick wins!

Some games are a simple as “ball toss” or even tag and foodways are different all over, not only in different countries, but also your own state. Like egg rolls and tamales are different and hamburger and dried fruit are different. Your culture and traditions of religious places and church and temple are journeys. They are hard not to lose in mainstream culture.

A lot of the games have stayed the same, like tublub, the rubber band game, the rock and sticks game and a whole lot more.

In a way, the Hmong aren’t as different as you may think, and games aren’t the only similarities.

Presentations at the Hmong Association

The first Hmong family came to Sheboygan in 1976. From a photograph [we were shown], we all figured that this was a pretty big family but nothing compared to the 6,500 Hmong there are in Sheboygan now!

An interesting thing we learned was about Bosnian refugees. Bosnian people are not Hmong people. They’re totally different, but they went through basically the same hardships and journeys the Hmong people went through. They were being bombed out of their homeland and didn’t come to America because they wanted to—they had to!

In 1982 there were problems with gang membership [among the youth in the Hmong community. They joined gangs] because a lot of young Hmong have to live in two worlds: at home (Hmong) and at school (American). The Hmong often are torn! They ended up choosing a gang as a way out.

Another man taught us how to play tub lub. It is a game that Hmong people play, often at New Years. You have a stick with a small rope on it; you wind a top up in the small rope. Then you hold the top in one hand and the stick in the other and whip the top onto the ground. Then you pull back on the string and the top will spin. Other people will try to knock your top off. They let us spin the tops in the hall, it was super fun! 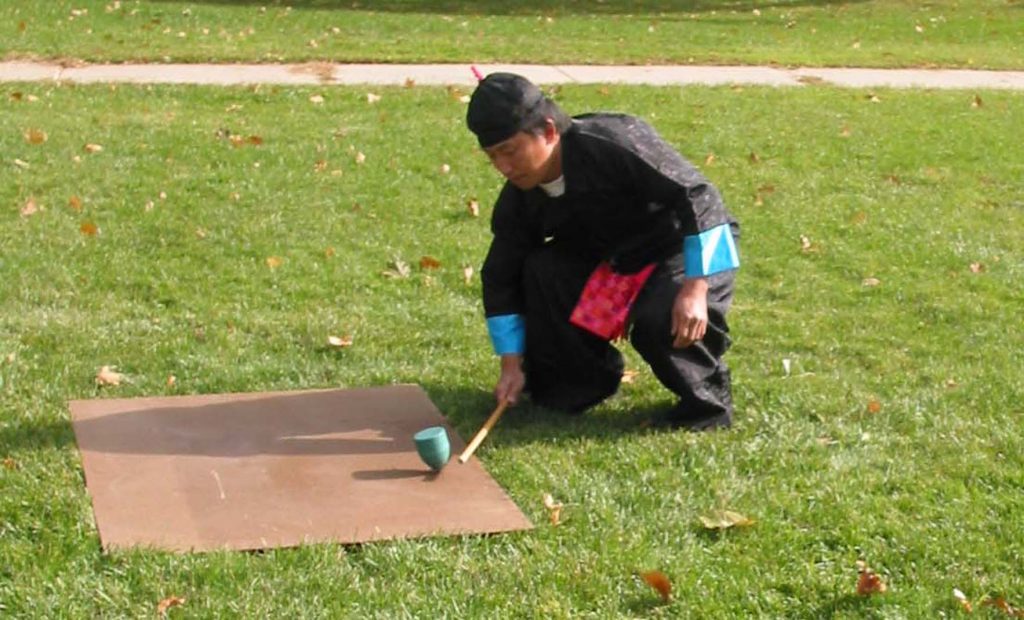 Then we went to play Tub Lub. Everybody went to play but me because I thought I’d do bad, but when I saw other people playing and making mistakes [so I thought I would try]. I went up to the line when it was my turn, I made a mistake but it started to get fun so I went again and the second time, I did it! It stood up and spun! I am not lying but I couldn’t try again because we had to leave.

The top game was made for girls because this man had three daughters and no sons and wanted a son, so he invented the top game and said whoever beats one of his daughters can marry her and play tub lub with the dad. This way the dad would have a son in law and not be lonely any more.

At the end of our visit the Hmong man gave us some paper with Hmong designs on them that you can color. I am coloring my designs for Christmas presents!

The Hmong people said they let the other refugees work there because they feel they had to go through the same difficulties as the Hmong.

Youth Groups and Games at WAHMA

At WAHMA (Wausau Area Hmong Mutual Association) we spent the afternoon with two youth groups. The groups [were established] to keep young people out of trouble. The first one showed us a game that involves teamwork. We had to build a structure using ten straws, fifteen marshmallows, and one balloon. Later, another youth group came and taught us some Hmong games. One was the Ball Toss.

In this game you get a partner (normally a girl if you’re a boy) and you toss a ball made of fabric. If you drop the ball you owe the other player a piece of jewelry or money. In another game, we’d lined up and when the line started to run around the leader tries to catch the person at the end. The last game we played was like Duck Duck Goose, but instead of tapping the person you leave a small object behind his back. 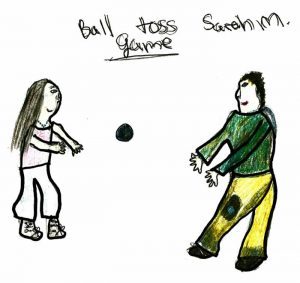 In Wausau at WAHMA some teenagers taught us how to play some Hmong games played in Laos and Thailand. First, we played a game called Ball Toss, a simple game where you toss a ball back and forth. This game was played mainly for the Hmong New Year. The game was made for boys and girls to talk to each other.

The second game we played has many different names such as Dog Chases the Tail and Caterpillar. You have a line of at least five people holding on to each other, and the person at the front tries to catch the person at the end without breaking the line. This game is harder than it sounds. [In Laos] they would play this game all night. The third game is kind of like Duck Duck Goose…

The first game we all tried was Ball Toss. Hmong people play this game at the New Year, mostly a boy and girl toss the ball to each other so they can get to know each other. Usually two people toss a ball with only one hand. The other game is called Caterpillar. The way you play it is a group of people holds each other on the waist and then the person at the head needs to catch the person at the tail. It keeps going in different patterns. I’m pretty sure this game was made to [create] community. This game shows me that whatever we do we need to keep hold of our friends… 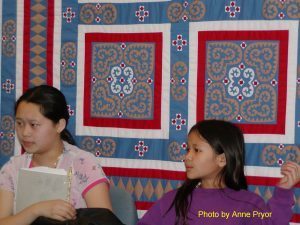 “When all is said, and all is done, working together does not just bring out the best in all of us, it brings out the best in each of us.” That is one of the first things Mai Kao Moua told us. She is the director of the Hmong Women’s Circle. The group is fairly small, but Mai hopes that it grows to be like the Girl Scouts, and that teenage girls all around [the state?] can be in the program. One of the group’s main foci is on working together and teamwork. Hmong people are very much an ethnicity where others come first. “Back in Laos, you’d take care of your family and friends’ wants and needs before you take care of your own wants and needs,” Mai said.

Mai taught us a game that, although it wasn’t played in Laos, requires a lot of team work. My group was trying to make a structure of fifteen marshmallows, some straws, and a balloon. After the structure was completed, an egg would be dropped from above and the structure would have to support it. The game required a lot of teamwork, because it’s hard if one person tries to take over, but it’s also a problem when nobody wants to give ideas. 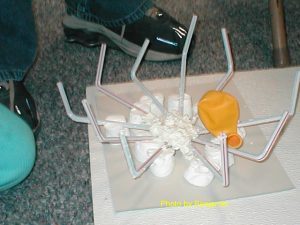 Three other games we played are traditional Hmong, and were played back in Laos. The most common game is Ball Toss, and it is still played at Hmong New Year and other times big groups of people get together. (My family and I saw it played at the Madison convention center during Hmong New Year this year.) The game is played with a teenage boy and a teenage girl. You simply toss a ball back and forth and chat to get to know each other.

Another game played back in Laos is very similar to Duck Duck Goose, but instead of tapping people on the head, the “it” hides a small object (such as a rock) behind one of the people in the circle. That person tries to chase “it” back to his/her place.

The last game we played can get pretty wild. In this game, a line of people hook on to each other, holding on to the back of the person in front of them. The line of players runs and wiggles while the person in front tries to touch the person in the back. Usually people get unhooked. We played with half a dozen kids at a time, but back in Laos they could play it with more than fifty! 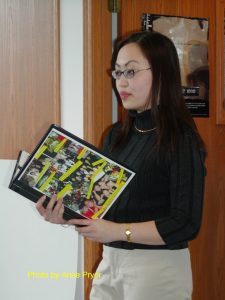 This is a very fun and frantic game. First everybody gets in line with their hands on the other person’s shirt. You run around, and the person in front tries to touch the person in the back… In Ball Toss, you toss a ball back and forth while having a conversation. The game is used by teenagers getting to know each other—especially girlfriends and boyfriends…