Ava began her extended inquiry project (see her article in the Great Blue section) by asking, “What do people think about the present Greenbush?” To support her research, students wrote for homework sample community survey questions which were reviewed the following day. Smaller groups of students continued drafting the survey, and after it was distributed by students, and completed forms returned by mail, small groups took turns collating numerical and qualitative results.

For another homework assignment during this same time period, students were asked to list their suggestions for improving the Greenbush community. We collated 95 responses and then combined them into 15 “Greenbush Design Principles.” While students their age often express their images of the future as high-tech utopias, the Randall students were so anchored in their study that they usually imagined the future of the Greenbush in terms of restoring the past or continuing the present with gradual changes. In their open-space and building designs, inquiry articles, and reflections, students expressed a strong desire for a continuity of values: a sense of community, ethnic diversity, gardening, tradition, and people knowing each other.

During our October field trip, we had talked with Brian Benford, the program director at Neighborhood House. Knowing that he was also an alder on the Madison Common Council, in the spring we asked his advice about drafting and presenting a resolution to the council. Brian came to our classroom and helped us get started. With several whole-class discussions and a number of small-group work sessions, our resolution was ready and it was placed on the council agenda for the last Tuesday of our school year.

Soleil gave the first speech about the historic Greenbush (embedded video), followed by Elena who talked about the contemporary community and Micah who addressed our proposals for the future (both included below in this section). The council unanimously adopted our resolution that established an annual Greenbush Day on March 21, asked City departments and commissions to restore historic Greenbush values, and committed the City to maintain the Greenbush as a mixed use, mixed income, and mixed ability community. The council spent 45 minutes, first listening to our presentation, and then discussing our resolution at length, including how it could also apply to other areas in the city. 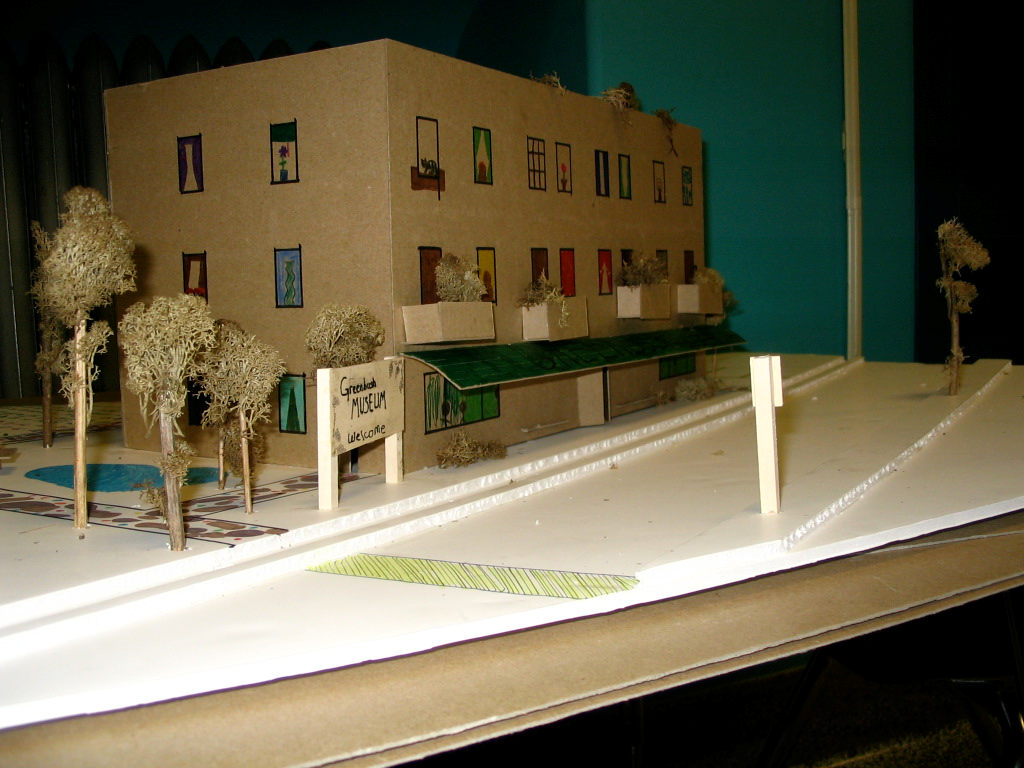 Thanks, all of you tonight, for listening respectfully to the kids. We’re confident in the worth of our historical, ethnographic, and demographic research. The many thousands of hours, collectively, we’ve spent studying the Greenbush add value to the entire city. And I think you’ll see more of this in the future—students joining residents and professionals in studying local communities.

So we want you to look beyond us as a 5th grade classroom, and pay new attention to the Greenbush. From Sicilian villages, Russian shtetls, and southern plantations, Italians, Jews, and Blacks found their way to the first great Madison multicultural community. Former alder Mike Shivers told us about his German grandmother visiting over the back fence with her Italian neighbor. Although they didn’t understand each other’s languages, his grandma would tell a joke in German, and her neighbor laughed; and then the neighbor would tell a funny story in Italian, and his grandma laughed.

That’s what your predecessors, back in the early 60’s, destroyed with Urban Renewal. Every building in the center of the Greenbush was torn down, including many buildings in good condition. The heart of the community was torn out. More than anything else, my students wish they could change what once happened. Noah wrote, “If I lived in the Greenbush and could go back in time, I would try protesting to the city one last time. Or maybe I would even do something heroic like running in front of a bulldozer or chaining myself to my house so they couldn’t destroy my home without hurting me.”

The kids’ major concern is that Urban Renewal never happen to this community again. We fear it will be tempting some day to another Common Council to tear down the not-so-beautiful Bayview, Parkside, and Brittingham apartments in the Triangle, once again remove vulnerable residents (in this case recent immigrants and people with disabilities), and sell this land at great profit to the university, hospital, or developers of up-scale condos. 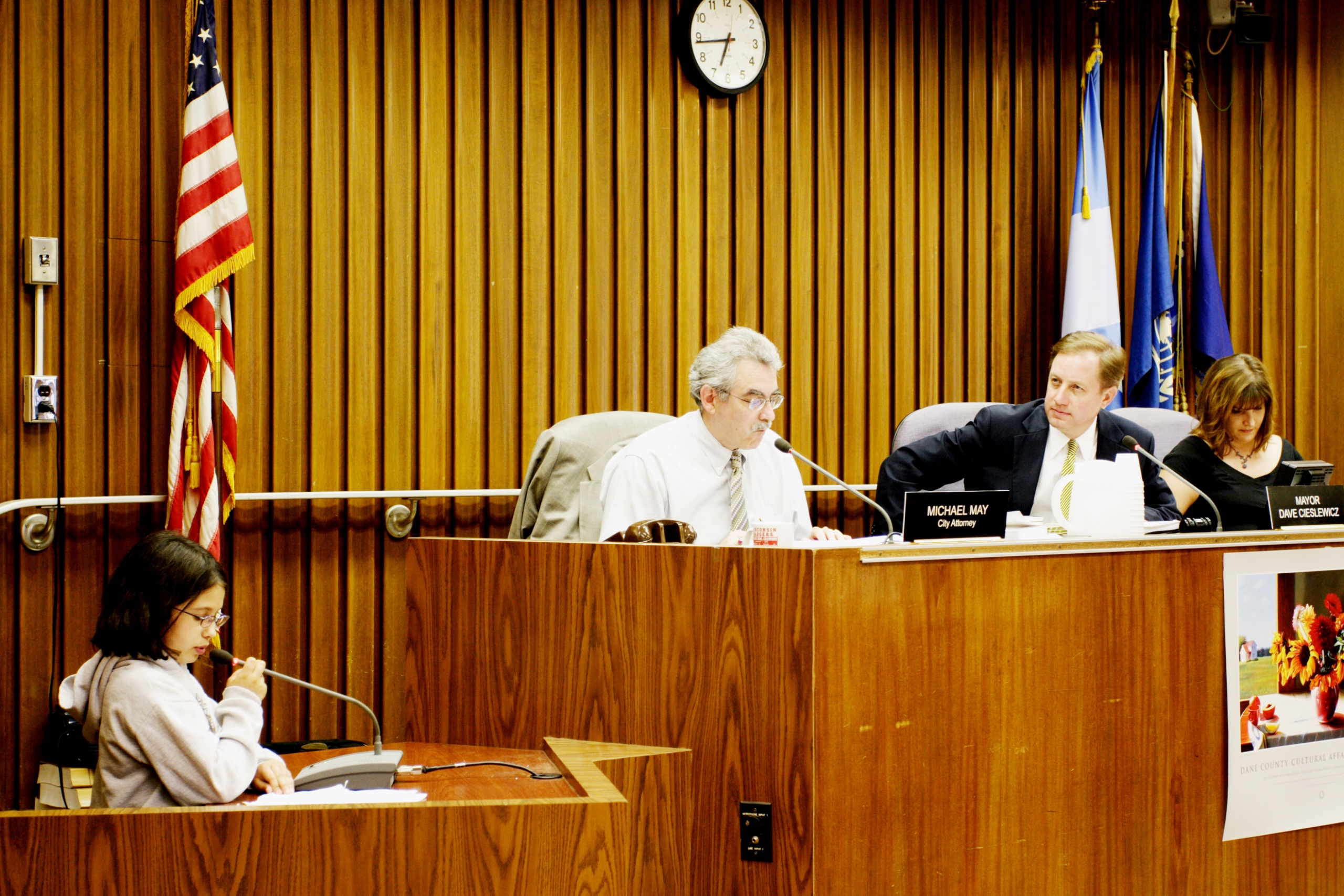 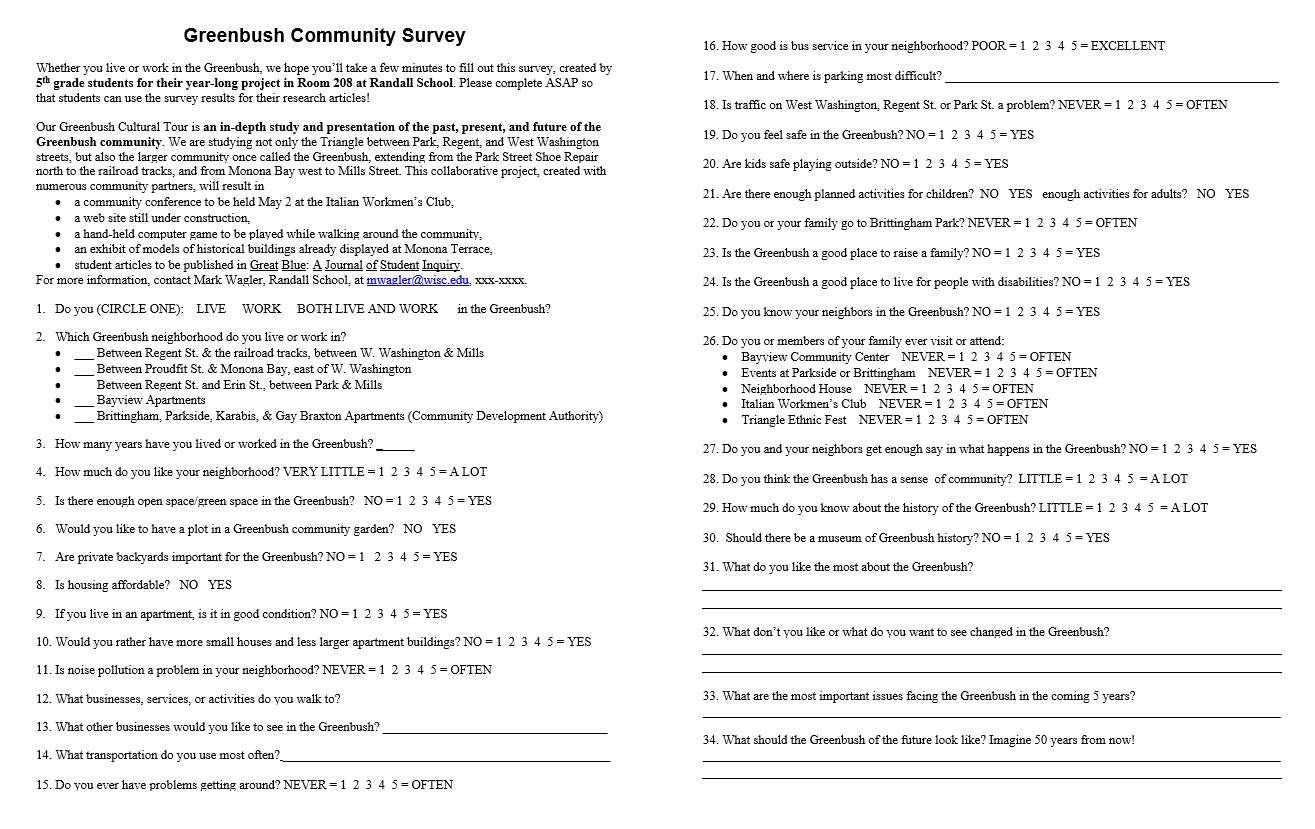 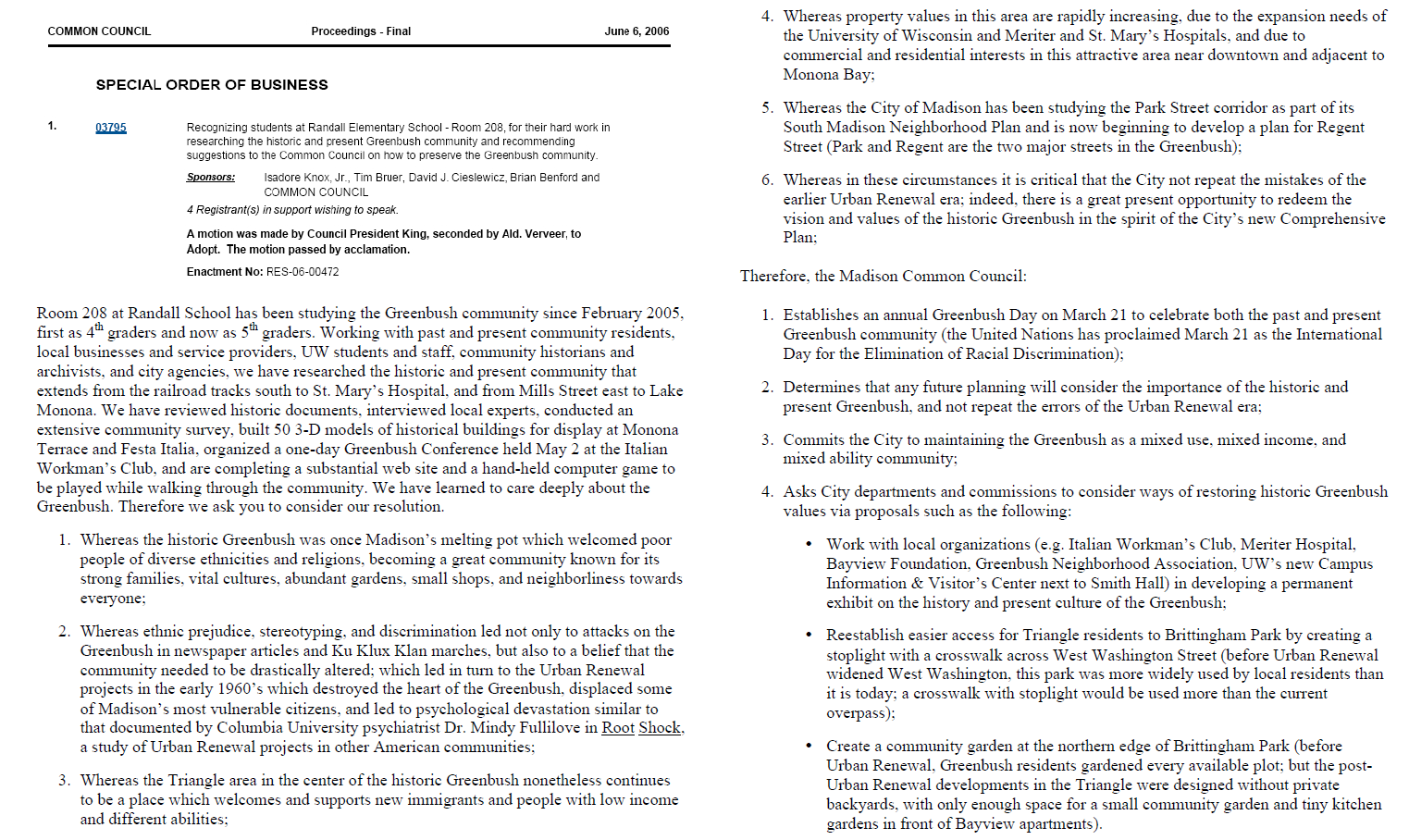 “We’ve been talking about how wonderful the past was but what’s happening today is also very important. Today many of the historical buildings outside the Triangle are still here, but the ones inside the Triangle were destroyed.

Neighborhood House moved to 29 S. Mills but more or less serves the same purpose. It has many activities for everyone. They are also very proud of their food pantry which many people donate to and are helped by.

I did research and looked at many newspaper articles on Longfellow School which is no longer a school but is still standing and is now a part of Meriter Hospital. In fact, part of the school is being used as a daycare.

Wonderful new buildings have been built and are being built. Bayview Community Center, for example, has many activities for both residents and non-residents. It is such an active place that kids enjoy being there.

We’ve talked to residents of the Triangle Apartments and it’s a really great place for people with disabilities. They have lots of activities and opportunities to get to know each other.

Village Co-Housing is fairly new.  It represents the old Greenbush in a way because they live so close, and they share a lawnmower and other things like that. For instance, when we went to visit a little while ago the common room was decorated because they’d just celebrated a birthday together.

Smith Hall will be ready this fall and they have plans for working with the community and doing services. It’s very convenient because it’s right behind Fraboni’s. Canollis, anyone?

Our class put together a survey for people in the Greenbush and put out almost 1,000 surveys and got nearly 200 back. Just to give you an idea of how much people like their neighborhood: on a scale of 1-5, 86% ranked it a 4 or a 5! That’s how much people love their neighborhood. Who knows if this survey had been done in the past if people would’ve ranked it higher, lower or the same.

To the question, “Are kids safe playing outside?” the community ranked it pretty high. They also said it is easy to get around. It must be very convenient because it’s safe for kids, the hospital and university are close by along with the lake and downtown. . . . I don’t think anybody, no matter what race or class, should be kept from living here.

I wonder if our planning for the future could increase the sense of community.“

“The Greenbush was a fantastic place. I would have loved to live there. But now, I don’t really want to. There are tall, ugly apartment buildings, and lots of noise from the surrounding streets. But for me, the biggest change was the gardens; they’re all gone. Before Urban Renewal, almost everyone in the Greenbush had a private vegetable garden. Now, nobody does. Gardens help bring out the culture in people.

To remember the Greenbush, our class thinks that there should be an annual Greenbush Day to help people learn about and remember the amazing history of the Greenbush. Another idea was a permanent Greenbush exhibit. I really liked that idea. Our class was so excited about that idea, that we created a model for a Greenbush Museum with architect Emily Ehlers.

The Greenbush did, and still does, hold people of many cultures. There was no racism, because everyone was the same. Simon Moss, a former Greenbush resident, said, “Maybe we got along so well because we were all in the same boat and that boat was poverty.”

The Greenbush is very valuable land. It’s near so much; the University, the hospital, the capital, and most of all, it’s right across the street from Monona Bay. Many large institutions would like that land. Our class thinks that the Greenbush should always be a place for people with disabilities, new immigrants, and low-income families. We want any future planning to be looked over for maintaining that type of neighborhood.

We don’t want to recreate the past, or keep the present the same, but we want to remember the past Greenbush as the wonderful place that it was. Houses can make a neighborhood, but people need to blend together in the right way to create a community.“