We went to the Chippewa Valley Museum on our Hmong tour and did a lot of things. We saw an object theatre, looked at panels, and went through archives. 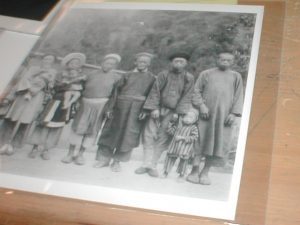 An object theater is a very dark room where you sit down and there are voices from speakers and pictures that appear.

This told the whole story of people who came to Wisconsin, with a small section about the Hmong. This also told about getting used to life in America. Food, work, everything. 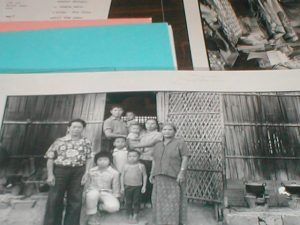 The object theatre was about foodways. … [A film] had voices, laughing and talking. We heard some songs in the background. It also showed the foods that they talked about, and it was kind of freaky because this thing kept on turning around and we saw all the kinds of food that looked real.

The object theatre was awesome, pictures popped up and went away, lights came on and off. One of the display sets is somewhat of a dining room [with] a table, some silverware, a candle and a vase full of flowers. Also in the dining room there was a kitchen. This is because the refugees/pioneers couldn’t afford to but an entire other room. In the other display area many things “appeared” because there were three rotations. One was about musical “opportunities” the refugees had, one was about hunting and the other one, I can’t remember … 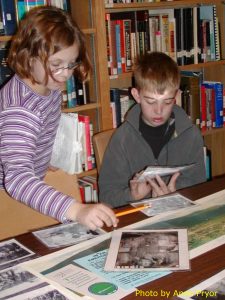 … I can only tell one thing I remember. When the Hmong came they didn’t know anything [about America]. They did not know how to speak English or how to cook because they usually cooked on stoves with fire, so they thought the fireplace was to cook their food. They had a guide who was Hmong, so the guide told everything. When Mayhoua came she thought the Jell-O’s were crayon because they had colors. … She [also] had lots of depressions because she was having a hard time in America. But later on she started to understand about American culture.

Archives are kind of like a library, except there are objects and pictures in archives and there’s no fiction section, it’s all information. There were two tables with pictures scattered all over them. First someone talked to us about creating and researching an exhibit. They said there [are] four big areas in the exhibit, what was life like in Laos before the war, what changes happened during the war, fleeing across the Mekong, and how being a refugee is different than being an immigrant. I think they showed all these very well. 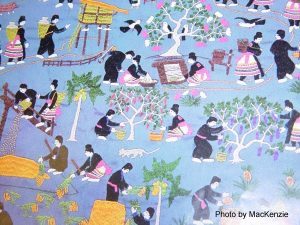 In the library we saw photos from the original, larger exhibit. The ones from Laos basically were of farming. They showed the fields, the villages, the houses, but most of them were of people farming, although there were some household work ones too. The museum must have been lucky to get some of the photos they had from the war. They had some of not only people in uniform, marching, but of training. I have no idea where they got those.

One that struck me was a lady picking vegetables. She had an odd look on her face, as if scared or tired. … One of my favorite pictures was of a big family (5 kids) in America sitting on a couch, while their dad tells them something. … The Hmong life in Laos pictures show pigs and chickens running around wild. A teenager is feeding a ton of wild chickens. She looks a little freaked out. I know I would be. They had some secret war pictures. One was of a Hmong soldier with and army general. What shocked me was that the troop[s] behind them [were] only Hmong. There were no American soldiers! 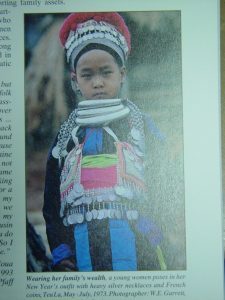 The last place we went at the museum was the panel exhibit of Hmong culture. [The exhibit] “Across the Mountain Tops of Laos” showed how happy the Hmong were before The Vietnam War. There was a photo of the beautiful landscape they lived in. There was an article they talked about the farming they did. One Hmong child said this: “I remember going with my parents to the rice field. I remember seeing them cut down trees. … They know how to make axes.” There was a photo of a village and there was a photo of the paj ntaub (pandau) that was just patterns.

The war one had one of the most terrible photos I had ever seen. That photo was of a boy, must have been 5 or 6, in uniform, getting ready to go to war. The article there was from a Hmong soldier. “It was a time … of fighting, and a lot of American jets or airplanes shooting bombs. … We were surrounded by the communists. …” There was a photo of a home in the mountains, the fields destroyed by Pathet Lao.

The Hmong then fled and got “Crowded into Refugee Camps,” as the title says. This one showed a picture of the new paj ntaub, the story cloth. There was a photo of tons of Hmong standing, crowded, waiting for the apartment. As one refugee said, “In 1976, there were 12,000 of us.”

“Starting over in Eau Claire” had what we might think of as a normal life. Why would normal life be put in an exhibit? Because it wasn’t normal for the Hmong. The largest picture was of a normal, busy highway. But in Laos, the Hmong didn’t even have cars. All the other photos were like that except for one. It was of a Hmong girl standing alone, confused, on a school playground.

Ger Xiong brought two Hmong flutes and a qeej. He started off by playing the small flute, the most popular [instrument]. He played a lovely song [that goes like this] “I left my land to this land, I miss my homeland, my friends and relatives…” The flutes were used to communicate from far distances long ago, when they didn’t have phones or anything… 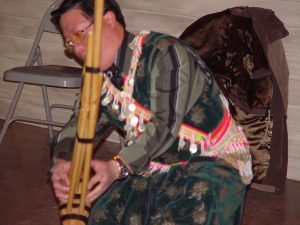 When there is a funeral, you need a qeej player to guide the dead person. The qeej talks to the spirit…[to guide it] to ancestors. It’s really difficult to play the qeej and learn the many different songs [for] funerals…Ger Xiong’s dad taught him how to play the qeej, so he got good at it…There are not many qeej players. About 50 or 60. I’m just estimating. That’s not very many Hmong guys…Me and Pao are learning how to play the qeej!!!

Ger won first place at the tournament for doing nice keng playing. He can do lots of stuff while playing the keng like jump, hop, stand on his neck, and flips. He said he is the best keng player in the world. He also said that he learned how to play when he was small like our age. 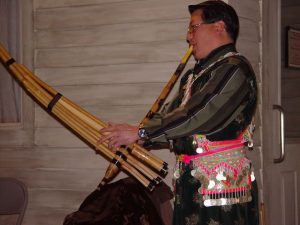 Ger Xiong is a k’eng player, a flute player, and also a really neat guy. Ger has lived in Eau Claire since 1991 and works as a machine operator. He plays the keng at Hmong New Year and at funerals. He says it is very difficult to learn how to play the keng, since there isn’t written music or even notes. You learn from a “master” and copy what he does. If you don’t study hard, you can’t play. Ger thinks it is very important to pass on the keng playing tradition, because if it is dropped there will be no way to talk to the spirits.

Ger Xiong himself is a very talented player. He won first place in the Hmong International competition. In order to be a good keng player, Ger not only had to learn how to play the instrument, but how to dance. When he plays the keng he swoops his body around and crosses his feet. He can do pretty fancy things while playing the keng, like flips, somersaults, and headstands. Ger also brought two flutes to show us. The flutes are played when a boy comes to a girl’s house at night and tries to beckon her outside. Ger Xiong was a really awesome guy. I’m glad I got to see him.

The flute was used to communicate through the mountains, and to communicate between a boyfriend and girlfriend. It is very, very complicated to learn. As Ger Xiong played, his fingers moved quickly, and he moved his lips up and down to control the amount of air going into the flute. 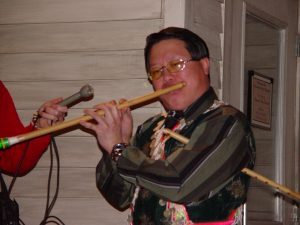 Ger Xiong has been living in Eau Claire since 1991, and he works as a machine operator. He and his kids sometimes do cultural shows. He learned how to play the qeej from his dad when he lived in Laos. He brought two flutes and played them for us. He moves his mouth up and down to make different sounds on the flute. He also played a qeej and told us about playing the qeej at funerals. Normally the qeej players are people known by the family of the deceased. It is very hard to play the qeej. You have to be very good to play it at a funeral. He thinks it is important for youngsters to learn the qeej, so that the tradition can be passed down and kept alive. 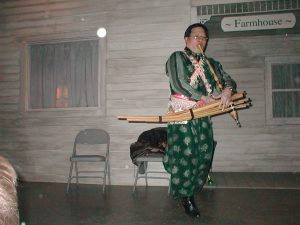 Ger Xiong wore Hmong clothes in bright colors like white, yellow, pink, orange, green and blue. One of his flutes was made out of part of a soda bottle. Ger Xiong put it there so the sound would come out better. Back in Laos, instead of using soda tops they used tall fat bamboo. The qeej needs six or seven pieces of bamboo with a hole in it for different sounds. Ger Xiong said that the flute and qeej say words. To understand, he said you have to be Hmong.